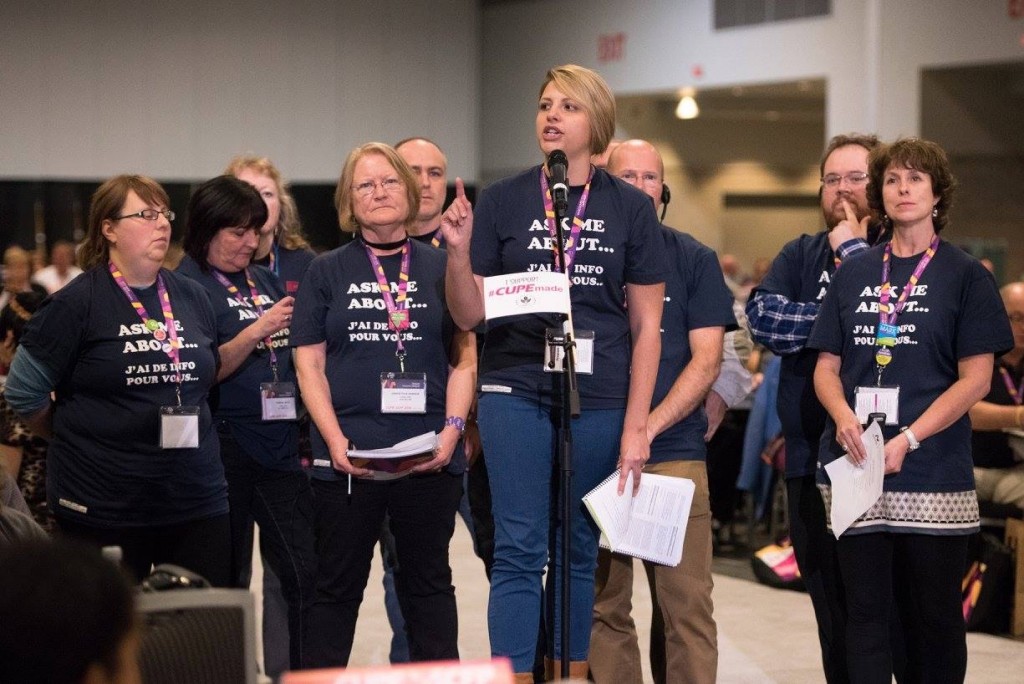 DAY OF ACTION AGAINST THE U OF M’S UNFAIR POLICIES FOR INTERNATIONAL STUDENTS: 2:00 pm, Thursday, July 30, 2015 Chancellor’s Circle (outside the Admin Bldg)

“Enough is enough.  We are students, not cash cows!” 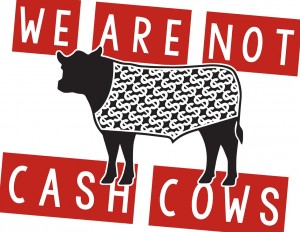 FUNERAL FOR U of M EDUCATION: 3:00 PM, Tuesday, May 19 at the Engineering Atrium (EITC)

Dress for a funeral.  Join the Student Action Network and supporters as they mourn for the loss of quality courses, education, and services as the University adopts significant budget cuts. 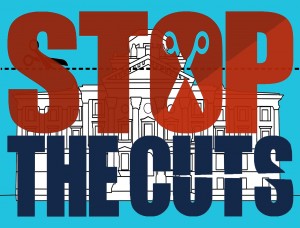 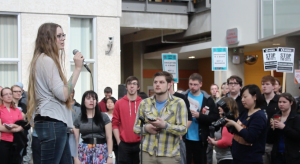 ack (VP Unit 1) delivers her speech at the rally. 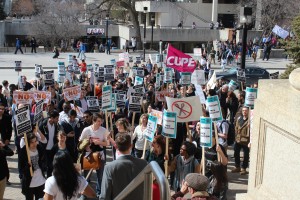 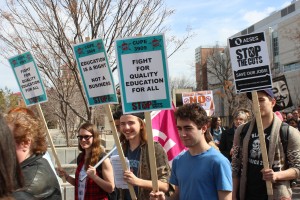 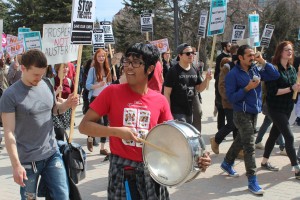 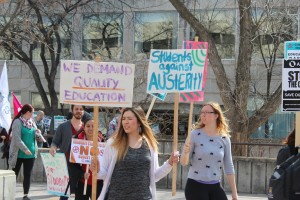 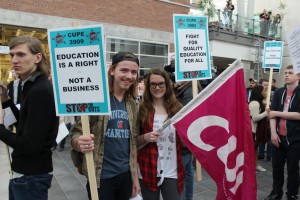 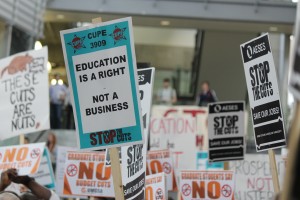 The Student Action Network is planning another rally to let the University Administration know that students are concerned about their priorities.  Cuts that jeopardize program offerings, increase class size, and limit student access to services degrade the quality of education.  Student groups are mobilizing together with labour unions, including CUPE 3909, in a struggle against the neoliberal university model.  Look for email updates from us before the event, check out SAN’s facebook event page, online survey, and watch for more posters. Join CUPE 3909 and the rest of the campus labour unions in support of student groups who are struggling against the shift towards a business / corporate model at the U of M.  Students are concerned that the budget cuts called for by administration will come at the expense of an accessible quality education.  Course cancellations, program  closures and cuts to services will severely impact the student experience.  For members of CUPE 3909, most of whom are also students, budget cuts might also result in a loss of employment or a greater workload for those who do get hired.  On January 27, the University will see and hear opposition to a budget that would compromise the quality of education when students and allies will rally at the Board of Governors meeting.

A campaign is forming around opposition to budget cuts at the U of M.  A group of students and staff are working together to educate the University Community around the negative effects the current and proposed budget cuts have had and will have on education.  27 January, at 3:30, join this campaign by attending a rally to take this message to University Governors.  More info to come.

A Public Student Assembly was held on 26 November to continue a discussion that has been taking place on campus about the negative impact of the implemented and proposed budget cuts. The budget cuts are troubling for anyone working at the University, but of equal concern is the effect that cuts will have on the quality of education delivered at the U of M.  This was CUPE 3909’s message at the assembly. So what? Cuts of this scale could result in layoffs, course cancellations, program closures and mergers, service cuts and a general deterioration of academic options and quality.

What next? The next university budget could be adopted by April, 2015, but we don’t know what the budget will look like because of a lack of transparency!

Students are organizing to stop the cuts. We are working with students and student groups, professors, staff and the broader university community to raise awareness and get people involved.

Get involved! Want to get involved, find out more, or host an information session with your student group?

Grad Student Fee Hike: In early May 2014, the University once again attempted to increase grad student fees in what would amount to a 327% increase.  Even though the proposal was issued at a time when the campus is barely populated, student groups (like the GSA and CUPE 3909) rallied their resources and voiced their disapproval.  The proposal was eventually dropped, for the time being, but this latest attempt by UM to ‘adjust’ continuing fees is a reminder that students have to be prepared to oppose efforts to make education less accessible.  Read the letter that CUPE 3909 and CUPE Mb sent to James Allum, Minister of Education and Advanced Learning, outlining our stance. Health Accord Campaign:
CUPE believes that health care should be strong, universal, freely accessible, and publicly funded; and a system that will ensure not just adequate care, but exceptional care for everyone.

On March 31, 2014, the 2004 Canadian Health Accord, which outlines the funding from the federal government to the provinces for health care spending, expired. We are calling on the current Federal Government to negotiate a new accord with all provinces and territories. One, which would provide stable and reliable funding for the long-term protection and expansion of Medicare for all Canadians.

A group of CUPE activists is working to protect healthcare and they have lots of opportunities for you to help out.  Find out more about the Health Accord Campaign and future events at their website or visit their facebook page. https://www.facebook.com/manitobansforpublichealth 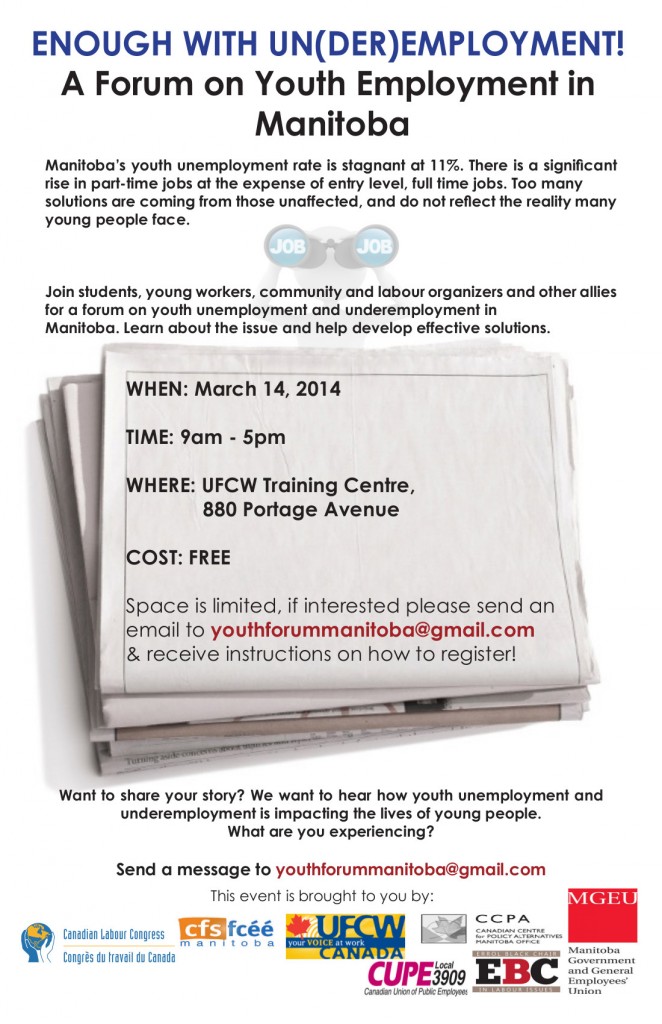 Enough with un(der)employment!:  CUPE 3909 is proud to help sponsor The Canadian Federation of Students forum to discuss creative and effective solutions to the increasingly challenging job market and the troubling trend towards youth unemployment and underemployment.  Many student academic workers will graduate into this difficult environment and sessional academic workers are traditionally underemployed so this forum is particularly relevant to CUPE 3909.  VP Unit 1, Gwen Suprovich, will attend on our behalf.

This event is free of charge.  Contact the CFS at youthforummanitoba@gmail.com for details.

Provincial Budget: On May 4, 2013, CUPE 3909 presented Premier Greg Selinger with a letter outlining our concerns over the NDP budget decrease to universities: from 5% to 2.5%.  We then petitioned support from the other campus unions (CAW, AESES, CUPE 1482, UMFA, and UMSU) and resubmitted this letter.  Selinger’s office referred the letter to Minister Selby. 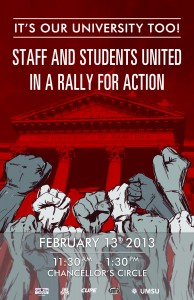 It’s Our University Too! Rally, February 13, 2013: The rally was a successful gathering of an estimated 500 members of the six university unions (UMSU, CAW, AESES, UMFA, CUPE 1482, and a large contingent of CUPE 3909ers) and allies from off campus united in opposition to the privatization and corporatization of our university.  There was a joint press release with each union providing a one page backgrounder.  CUPE 3909 prepared leaflets on the issue as it affects our membership and placards to reflect our concerns.  There was considerable media presence and you will have received an email with links to some of the better coverage.  We know that senior administration was listening closely to the speeches and while Barnard was out of town he did call a Town Hall, in part to respond to the opposition.  The town hall allowed for another opportunity to voice our concerns and stand in solidarity with CAW custodial services, until that time suffering under Aramark management.  During all of this the Canadian Centre for Policy Alternatives published a fast facts sheet in support of the rally and will publish another one soon to explain our position on campus. Inter union solidarity is something we’ve been working towards for years and it’s very encouraging to see the possibilities of developing one strong message from so many different perspectives.  The University has since determined to remove Aramark management of custodial services and on June 14, 2013, President Barnard held a meeting with Union representatives to hear concerns.