Starting in the winter term 2014, you will see this poster in your department.  We thought it was important to remind everyone that people who work as Sessional Instructors, Librarians, and Counsellors make important contributions on campus and off.

We currently have a public service announcement on UMFM that speaks to the important role played by Sessional Academic Workers on our campus.  Listen to the PSA that calls for recognition and respect for  sessional academic workers. 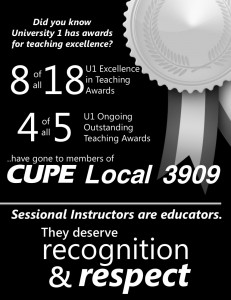 During the 2012 – 2013 academic year, we put out a poster with an interesting stat:  Students in University 1 courses nominate their Sessional Instructors for excellence in teaching awards, usually without knowing that their instructor does not have a permanent faculty position and has to apply every year or every term.  And these instructors win awards in numbers disproportionate to their numbers on campus.  Lecturer/Instructors, who are Student Academic Workers, also do well in this awards category. 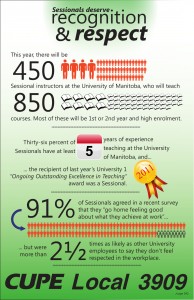 Recognition and Respect was adopted as a campaign phrase in September 2012.  We know that some of our members are recognized as educators, they win awards, and they are well known on and off campus in their respective fields.  We also know that some of our members have the respect of their students and colleagues.  Unfortunately, not all Sessional Instructors are recognized for their contribution to the University and, sadly, response to the University’s “Outstanding Workplace” survey showed that while 91% of Sessionals go home feeling good about what they achieve at work, they are 2 1/2 times more likely as other staff to feel respected in the workplace.”