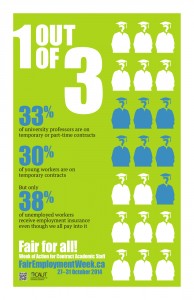 On October 28 CUPE 3909 held a dinner for Sessional Academic Workers in appreciation of their contribution to the University of Manitoba and as part of Fair Employment Week.  Fair Employment Week is an initiative of the Canadian Association of University Teachers (CAUT), and is a week designated to remember that all academic work must be fairly supported, validated, and remunerated.

At a time when 33% of professors at Canadian universities are on temporary or part time contracts, the plight of sessional, adjunct, and contract professors as well as graduate students who work as lecturers or instructors, remains a topic of discussion.  The president’s column for the CAUT Bulletin “Ivory towers have a dirty little secret”, which dealt specifically with this issue, appeared in the Winnipeg Free Press.

Noam Chomsky recently spoke to the Adjunct Faculty Association of the United Steelworkers in Pittsburgh where he remarked on the similarities between the corporate business model designed to reduce labor costs and increase labour servility and the corporatized university that is increasingly hiring precarious workers.  Read article here.