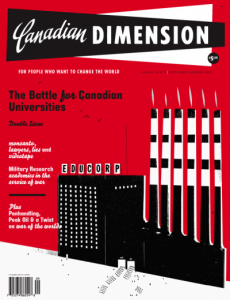 For those interested in a little background, but specifically tied to our own University of Manitoba, the September/October 2005 edition of Canadian Dimension is particularly apt.  Among other articles touching on the privatization of and corporate influence on Canadian universities, there is an article that delves into the attempt by the U of M to suppress the film “Seeds of Change” which documented the takeover of Manitoba agriculture by that agribusiness vulture, Monsanto.  It examines the connection between the University and Monsanto, especially the invitation to Monsanto to set up shop in the University’s Smartpark.